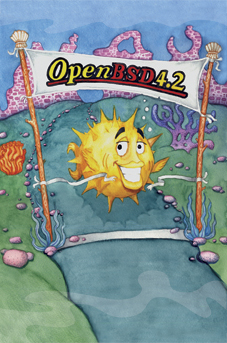 openbsd Theo de Raadt has announced the release of OpenBSD 4.2: "We are pleased to announce the official release of OpenBSD 4.2. This is our 22nd release on CD-ROM (and 23rd via FTP). We remain proud of OpenBSD's record of more than ten years with only two remote holes in the default install. As in our previous releases, 4.2 provides significant improvements, including new features, in nearly all areas of the system. New and extended platforms: PCIe UltraSPARC IIIi machines like the V215 and V245; AlphaServer 1200 and 4100. Install and upgrade process changes: new install method - for the most popular architectures, the FTP sites have a 200MB install ISO file, which contains the base set, permitting non-network installs; allow the specification of an NTP server during installation. Improved hardware support, including native Serial ATA support...