Penetration testing and security auditing requires specialist tools.The natural path leads us to collecting them all in one handy place. However how that collection is implemented can be critical to how you deploy effective and robust testing. It is said the necessity is the mother of all invention, and NodeZero Linux is no different. Our team is built of testers and developers, who have come to the census that live systems do not offer what they need in their security audits. Penetration Testing distributions tend to have historically utilized the “Live” system concept of linux, which really means that they try not to make any permanent effects to a system. Ergo all changes are gone after reboot, and run from media such as discs and USB’s drives. However all that this maybe very handy for occasional testing, its usefulness can be depleted when your testing regularly. Its our believe that “Live System’s” just don’t scale well in a robust testing environment. All though NodeZero Linux can be used as a “Live System” for occasional testing, its real strength comes from the understanding that a tester requires a strong and efficient system. This is achieved in our belief by working at a distribution that is a permanent installation, that benefits from a strong selection of tools, integrated with a stable linux environment. NodeZero Linux is reliable, stable, and powerful. Based on the industry leading Ubuntu linux distribution, NodeZero Linux takes all the stability and reliability that comes with Ubuntu’s Long Term Support model, and its power comes from the tools configured to live comfortably within the environment.

Notes for version 1: NodeZero is primaraly designed to be installed on the disk! For installation type: install For live mode type: live Username for live mode: nodezero Password for live mode: 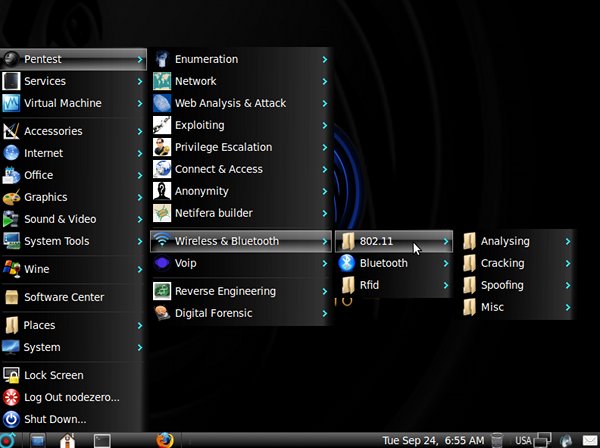