Ultimate Edition 2.0 is built based off Ubuntu Intrepid Ibex (daily build), by hand, it is w/o a doubt gorgeous. I am releasing a 32 bit, 64 Bit & and a Gamers edition (x86 based). Ultimate Edition 2.0 is loaded to the hilt with themes, wallpapers, icon sets, gdm login screens, and Usplashes. If you have a 64 bit processor I highly recommend the 64 bit edition. I have purchased a second mirror just for this release the only thing on that mirror is this release on unlimited bandwidth, we also have 5 new mirrors inbound. Just because of the added bandwidth available it is still important to help & torrent this release. This release has all the goodies pre-added you have came to love with previous editions & a few new ones. I would like to be forthcoming in telling you that the usplash does not work & apologize, there must have been some sort of drastic change in the usplash code, if I find a fix a new "theme pack" will be released to fix it. The ones fortunate to have been able to beta test Ultimate Edition 2.0 have had across the board said it is fast & I fully agree. One of our testers has a sound card that does not work in Intrepid, but does in Ultimate Edition 2.0. This release has a newer kernel & all updated as of release date pre-installed for your convenience. Oh yeah, Compiz Fusion works right off the live DVD w/o drivers ;). I also would like to apologize I have not at current time had the opportunity to update the repository; I am under a constant workload, I will address this issue when I have the time. If you do not like errors for example, an upgrade that will not install from our repo please remove our repo from your list until I have time to address this issue. This is the best I can advise at current time.

I felt it was time I stepped up to the plate and released a Gamers edition, I have really slacked in this department. The "Gamers Edition" includes all software included in Ultimate Edition 2.0 (x86) plus the following games. 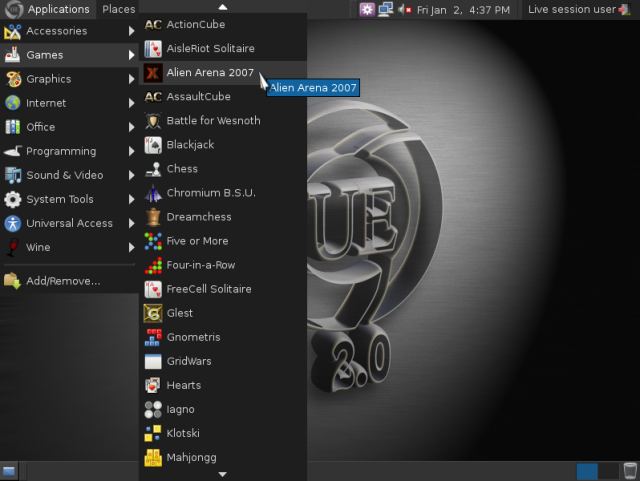